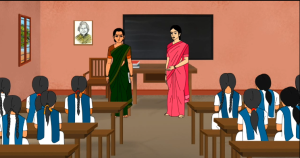 Mythri is an Animated video created to impart awareness on Menstrual Hygiene for adolescent girls. “Mythri” is a Sanskrit name, meaning friend (female). The contents of the awareness video has been put together by visiting government schools, especially in rural Karnataka, and interacting with adolescent girls, teachers and parents on the menstrual needs, concerns and questions of adolescents. At present the video is in Kannada, with subtitles in English and Kannada.

Intention: This project was initiated in 2010 with the intention of finding effective ways to impart awareness to adolescent girls about Menstrual Hygiene. As we visited schools and interacted with girls, we felt the need to come up with an interesting and simpler way wherein more people can do what we were doing. Thus evolved the idea of Mythri as an Animated video which the girls would be comfortable watching, and would have all the information and lessons we learnt to help others impart awareness.

The video and all information provided is free of cost, so that the message spreads across easily and reaches anyone in need of such information.

The content: The video has been conceptualized based on the questions asked by about 5000 adolescent girls in government schools in Bangalore,

Tumkur, Hoskote, Devanahalli, Kolar, Mangalore, Karwar, Gulbarga, Mandya and Chamrajnagar. While the questions came from the children, the answers were sought from reputed doctors and from the book on menstrual hygiene published by the National Rural Health Mission (NRHM). The contents therefore, focus largely on the concerns of adolescent girls and what they wish to know instead of assumptions on what we feel they must know. Therefore, greater attention has been given to basic questions, myths and misconceptions, maintaining personal hygiene and the biological aspects.

This blog shares experiences in imparting awareness sessions on Menstrual hygiene, answers FAQ’s on this issue and provides the link to download and use the video along with necessary guidelines to impart awareness (refer “The Module”).

The creators: The contents of Mythri have been put together by Sinu Joseph and Vyjayanthi. K. Mythri was originally initiated under the platform of Doctors for Seva, a project of Youth for Seva (an NGO). At present, it is an independent project available to any organization, group or individual. Both Sinu and Vyjayanthi have traveled across Karnataka since 2010 meeting and talking to adolescent girls and understanding their concerns and sharing their stories. Mythri is the product of their experiences. You can contact them at contactus@mythrispeaks.org for any queries or to share your experiences in imparting awareness on Menstrual Hygiene.

Mythri has been shared with heads of the Health Department and the Education Department of Karnataka. It has been greatly appreciated and encouraged by the government. The government interest in Mythri has led to the following outcomes:

So far, Mythri has reached over 15000 adolescent girls directly through our intervention, and another 20000 girls through partner organizations who have been trained to use the video and conduct the sessions.

Through the government involvement, Mythri has the potential to reach out to around 4 million adolescent girls across 5 States in India, year after year.