A lot has been written about the recent story of women in menstruating age group not being allowed entry to the Sabarimala temple. The write-ups either point to mythology to reason out the ban or present the feminist’s view of discriminating against women. However, the most pertinent question of how temples affect menstruating women has hardly (mostly, not at all) being written about.

Do we really think our forefathers conspired against women to suppress them and invented these rituals just to discriminate? If India was such a patriarchal country, we would not have lasted this long. As a woman who has travelled alone and worked across rural India more than most average women have, I have never felt safer and more respected than when I’m in villages where we claim patriarchy rules.

We’ve all been so busy trying to provide answers, that we’ve missed asking the right questions. This article is not an attempt to provide all answers to the Sabarimala issue, but hopes to point readers to a new direction wherein we are more likely to find answers. We also hope that with this article, readers will be able to point us to sources who can better answer these two questions:

1. What is the nature of the energy in Sabarimala?

2. What is the effect of this energy on women in the menstruating age?

Many people try to explain the reason using mythology. So stories have come up of Ayyappa (the diety in Sabarimala) being celibate and that’s why women are not allowed to enter the temple. Mythology is nothing but a simplified story to make comman man follow things which are beyond his comprehension. Mythological stories are scripted to convey the spiritual aspects in a metaphorical way; and as such should not be taken literally.

We cannot understand issues without understanding the language and context in which it was set. In the context of the Sabarimala temple not allowing menstruating women, the mythological stories behind Ayyappa being celibate should be explored to understand what they point to.

Perspective of the Thantri’s family

Last week, our team travelled to Bhagavati temple in Chengannur (Kerala) to find some answers. We also interacted with Smt. Devika Devi, mother of the current Thantri (chief priest) in Sabarimala to understand her take on the whole story.

Smt. Devika Devi, aged around 80 years, told us something which confirmed what we were thinking. She said “Many women don’t realize that their health will be negatively impacted if they went to Sabarimala. Besides, if menstruating women went to the temple, the energy of the place will be reduced.”

Even if we didn’t care about the latter, shouldn’t all women be concerned about the first remark?

There are complex sciences that go into building temples and the rituals involved in maintaining them. Ancient Indian knowledge systems such as Agama Shastra practiced by few Stapathis (Architects) are used in temple construction and involve complex geometry.

Very few people today, priests included, fully understand how temples impact people’s energy fields. Further, there is even lesser understanding of how temples affect menstruating women. Unfortunately, the whole reasoning has reduced to one of impurity, which is not the case. There are profound thoughts involved in designing ancient temples and they were not really places of religious devotion alone. The ancient sages who understood what it took to experience spiritual upliftment, provided a space for common man to experience some of it, via the temples they consecrated. But how can temples and stone idols impact human beings?

There are experiments which have proven that stones, crystals and water can hold memory and frequencies. The normal potential of an average person is between 30 – 100 milli volts. But, for super athletes and extraordinary thinkers, it was found to be around 2000 milli volts. For people who are depressed, it is around 5 milli volts. Being around stones which have been infused with a higher energy is bound to affect our own energy potential.

Apart from spiritual upliftment, most temples have energies which are known to heal or improve one’s health. For example, the Bhagawathi temple in Chengannur is famous for healing women suffering from fertility issues and menstrual disorders. Women who visit this temple (not while menstruating) might experience a shift in their menstrual cycle to find it syncing with Amavasya (new moon), which is considered to be a sign of a healthy cycle. I have experienced this and it can be easily verified by other women who have been here.

The prana prathistha, that is the process of consecrating a Murthi (Idol) was how the priests infused life and energy into the Murthi. The architecture of the temples further ensured that this energy could be stored and directed towards devotees. The interesting part which we learnt in conversation with Smt. Devika Devi is that every temple could have a different energy, even if the worshipped diety is the same. So only the Thantri or chief priest who was involved in consecrating the Ayyappa temple in Sabarimala would fully know what exactly he put in there. The Sankalpa, or the intention that is put into each Murthi is what decides the rituals to be performed for each temple. And simplied versions of explanations would be passed on to devotees so that the rituals performed would upkeep the energy intended.

If we look at the Sabarimala temple rituals, it is all about getting men to renounce worldly existence by maintaining celebacy (among other practices) and attaining spiritual enlightenment through this process. Perhaps, the entire temple at Sabarimala is consecrated to support this intention. So, what would happen if women entered such a space?

Ayurveda is based on the tri–doshas (bio-energies) that govern the functions of the human body. Of the three types of doshas namely Vata, Pitta and Kapha, it is the Vata dosha that needs a closer look to explain menstruation. Or more precisely, the sub-type of Vata dosha called Apana Vayu. 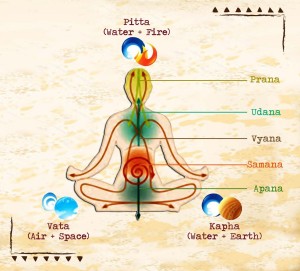 All spiritual activity is aimed at uplifting our energy upwards. It is one of the reasons why we are told to not eat anything before a puja or a visit to the temple. The process of digesting food and dispelling it outwards necessitates the downward flow of Apana. If we interfere with this through spiritual activity on a full stomach, both our excretory movement downwards and the upliftment of energy upwards will be affected. In some cases, people who engage in continuous chanting for 5-6 hours, experience difficulty in passing motions as the Apana is turned upward. Those pursuing the spiritual path are therefore recommended to have light and raw diet of fruits so that there is minimal interference with Apana.

So how can spiritual activity interfere with the process of menstruation?

If Apana Vayu is forced upwards in menstruating women, they could experience physical pain and their flow could even stop. This is why menstruating women are told to abstain from all spaces where the energies would reverse the downward Apana. If menstruating women visited ancient temples (which are known to be powerful energy centres) repeatedly or performed certain types of Yogasanas (such as inverted postures) during their period, they will most likely observe a change and discomfort in their cycle.

Why Sabarimala restricts entry of all women who could menstruate?

Brahmacharya is the state of transforming sexual energy with the intention of directing it upwards for spiritual enlightenment. It is different from the western understanding of celibacy which talks about mere abstinence from sexual activity.

Tantra substantiates its techniques of spiritual development on the control and channelising of sexual energy.

While in men, semen is the fluid containing the sexual energy, in women it is the menstrual blood. Both these have life giving properties and are considered potent. Practices which involve Brahmacharya and attainment of spiritual upliftment transform the sexual fluids into subtle energies which Ayurveda calls Ojas and Tejas. So if women followed Brahmacharya or came in contact with energies which helped to transform their sexual fluid into subtle energies, what could happen?

If women took to practices which transformed their sexual energy, the menstrual flow would reduce and ovulation might eventually stop. Obviosuly, this would affect their ability to reproduce. So while women can definitely pursue the path of renunciation and follow practices that the Ayyappas do, they should be aware and okay with the idea of not menstruating. If women stopped menstruating, life would come to a stop. Could this be the reason why women of menstruating age are denied entry into Sabarimala even if they are not menstruating?

The above explanation is not a “belief” to be dismissed or accepted. Afterall, if temples do negatively impact menstruating women, we need to be aware and not leave it to a question of following one religion or not. At least for the sake of curiosity if nothing else, let us dig deeper to really understand whether or not temples actually impact menstrual cycles. Let’s not reduce feminism to fighting for things which we have no knowledge about, and worse still, might actually cause us harm.